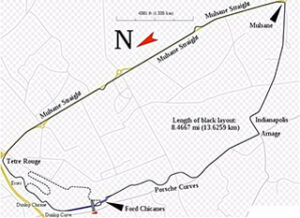 The Race Track at 24 Hours of Le Mans

Ever since the day in 1978 when I first traveled to France to witness the death-defying madness of the fearless, multi-lingual men risking their lives in sleek, aerodynamic mechanical bullets to win the most prestigious, oldest and greatest endurance sports car race in the world, I knew that I wanted to weave that experience into a novel.

For those not familiar with Le Mans, the race is set against a backdrop of the countryside of northern France that looks like a Cezanne painting. Every June since 1923, from one Saturday at 3 pm to the following Sunday at 3 pm, the public roads combine temporarily with the permanent race track, the Circuit de la Sarthe, to become the 13.63 km site of the 24 Hours of Le Mans, commonly known as the Grand Prix of Endurance.

Organized by the prominent Automobile Club de L’Ouest and by invitation only, the 24 Hours of Le Mans is the culminating point of 9 races in the United States (called the American Le Mans Series) and various affiliated races in Europe. There is no prize money, and the cost of participating, including transportation, spare parts, drivers, fuel, tires, and the like, is the highest in the racing world, running well over a million dollars for a two-car entry.

There are four competing classes--custom built LMP1 and LMP2 prototypes and production based GTE-Pro and GTE-Am cars—totaling 55 cars in all. No other motorsport event is as thrilling, and legendary, as Le Mans, where speeds have been clocked in excess of 250 mph down the Mulsanne Straight.

The battle between diesel and petrol powered, factory-sponsored prototypes is fiercely fought, and even the most highly developed and technically enhanced equipment is put to the supreme test at Le Mans, where accidents and mechanical breakdowns are commonplace.

The rules stipulate that the car that crosses the finish line after 24 hours having completed the greatest number of laps is the winner. No more than three drivers can have participated in the driving of each car. Thus, the physical endurance and skill of 165 hand-picked drivers are measured every second, as they strive to achieve the fastest lap speeds and complete the race.

Simply put, Le Mans is not for the faint of heart, as Lady Luck shines only upon zero-mistake performances under such nerve-wracking conditions. It all makes for the most exciting road race in the world. What better setting for a novel of intrigue and romance?